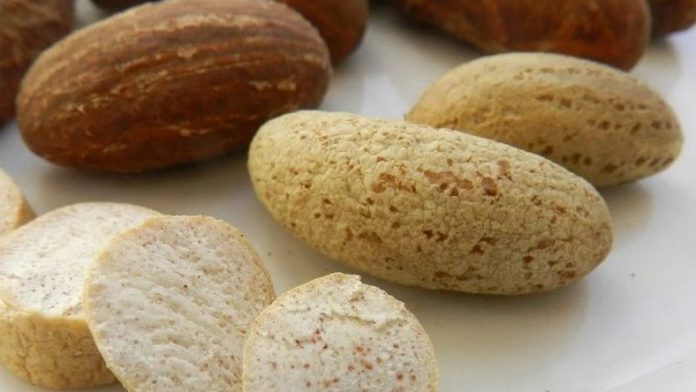 Garcinia kola, better known as Bitter kola, is a flowering plant found mostly in the tropical rain forest region of Central and West Africa. In folkloric medicine, every part such as the seeds, stem, and leaves has medicinal value.

Bitter Kola has numerous benefits as it is famed for improving the sex drive and performance of men who patronize it. Even though it comes with a bitter taste, people shun their eyes and still take it because of the benefits.

The usage of bitter kola is not limited to traditional activities alone. As a matter of fact, the fruit, seeds, nuts, and bark of the plant have been used for centuries in folk medicine to treat ailments from coughs to fever.

The bitter plant, which is believed to contain a high source of vitamins and minerals such as Vitamins A, C, E, B1, B2, B3, fiber, calcium, potassium, and iron, also carry other antioxidants. Research has been conducted by accredited institutions to find out the possible healing attributes of the bitter plant.

The results of the research are not only amazing, they’re incredible as well.

Studies have shown that when it comes to the improvement of sexual performance, especially among men, bitter kola is royalty. Bitter Kola does not only increase sex drive, it also improves the sexual performance of men who consume it.
And in other to be effective, it is advisable to chew the kola for at least two minutes before intercourse.

Osteoarthritis is the degeneration of joint cartilage and the underlying bone that causes pain and stiffness, especially in the hip, knee, and thumb joints. According to scientists ,the causes of Osteoarthritis can include joint injury, obesity, and aging.

Bitter kola seeds have commonly been chewed on in Africa to fight against inflammatory conditions like arthritis. One 2008 study showed that patients with osteoarthritis in their knees showed significantly reduced inflammation when eating bitter kola compared to a placebo. The high levels of potassium in bitter kola may be a contributing factor in reducing inflammation.

Early studies suggest that a chemical called kolaviron, which is found in bitter kola, may protect against hypoglycemia in people with type 2 diabetes. Although this first study was done on rats and has not yet been reproduced on humans, these early findings are promising.

5. It improves the function of the lungs.

The fibers and lung tissues are not only strengthened when bitter kola is consumed regularly in a considerate amount, it also stabilizes any other counter effect.
In addition, it helps in the maintenance of good respiratory track as well as treating chest cold.
Still wondering why some smokers move along with bitter kola?