Though the National Democratic Congress (NDC) is yet to go to internal polls to elect it’s candidate for the 2024 general elections, an official communique concerning the elections has been released. The communique seeks to caution NDC members and particularly those aspiring for positions to desist from engaging in certain unethical and unpleasant practices.

The statement requests aspirants to refrain from courting unpleasantries for sitting NDC members of parliament. According to the party’s national council, their attention have been brought to the said problem where aspirants in their quest to win, paint sitting MPs black. Claim they’ve abandoned their constituencies and do not engage in any proper developmental project.

“It has come to the attention of the National executive committee of NDC that some individuals who intend to contest for the party’s 2024 Parliamentary primaries are going round constituencies with sitting MPs instigating hatred and malice against them. These individuals, amongst other things, have been alleging that some of our MPs have abandoned the constituencies and prefer to stay in Accra… The party wishes to inform its numerous members and sympathizers across the country that it has become necessary for all our 137 members of Parliament to be present in Parliament at all times to perform duties that are extremely of importance to the nation and their constituencies, hence their unavailability to be in the constituencies at regular times as used to be the case,” the statement indicated.

The communique which was signed by the party’s General Secretary; Aseidu Nketiah also threatened to punish party members who go contrary to what has been said. The party also cautions members not to campaign outside the yet to be announced campaign period. 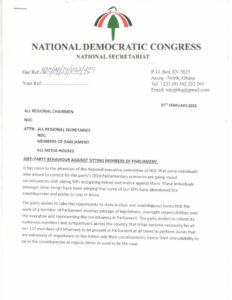 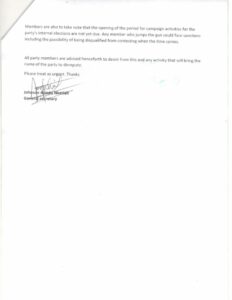 In today's article we would share with you the price of iphone 12 at Franko Trading in Ghana and the spec of the phone....
Read more
General
READ ALSO:  Ghana Is In Crisis, Accept It And Face It Squarely - Prof. Botchwey To Government

In this article, we would be taking you through some of the special MTN bundle offers and their prices. In most times, people have...
Read more
Education & Scholarships

In this article, we would be educating you on all the mixed school to aid one in their school selections. In our previous article,...
Read more
Education & Scholarships

You are about to discover everything that you need to know about the WASSCE 2022 grading system. Expect to get more other information as...
Read more