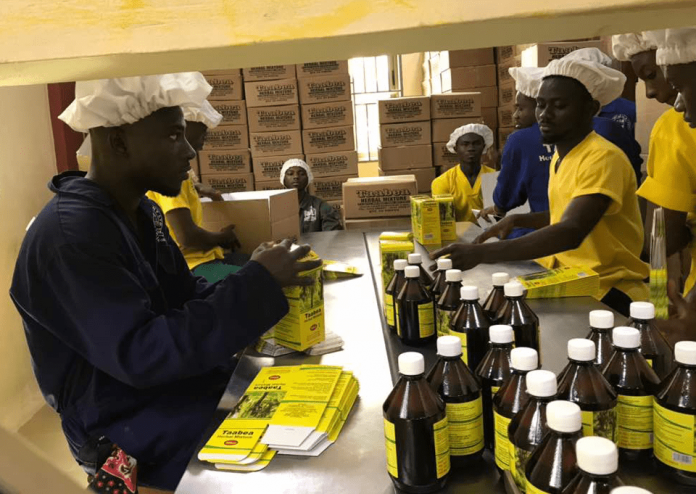 TAABEA COMPANY LIMITED is a company focused strictly on the production of herbal medicine in Ghana.  The history of its production and demand begun in Kumasi when the CEO,  Dr. Agyeman and his younger brother Gideon Agyeman hatched the idea in 2008.

They started with a capital of GHC 100 which was able to produce of 9 cartons of the herbal medicine. Due to its efficacy and recommendation, Taabea gained popularity within a couple of months as it spread across the country. A few other people were employed and they increased production to 25 cartons.

Taabea has eventually become a household name within the country and beyond. It is known in most African countries and it is gradually taking receiving some popularity outside Africa due to the testimonies. Taabea’s efficacy for the cure of malaria has no match in the world of herbal medicine.

THE MISSION OF THE COMPANY

The mission of the company is to improve the lives of people by developing safe and effective Herbal Medicines and to educate people on the potency of Herbal Medicine to build interest in its use.

The vision of the company is to provide remedy for various ailments prevalent in our societies. The company hopes to achieve this by improving on its knowledge in the use of herbs, plants and roots to provide effective medicine for different ailments through scientific research.

Before you take in any drug, you need to check the ingredients used in manufacturing the drug to ascertain how good it would be for the body. The ingredients are:

Taabea comes in two forms as the mixture is in liquid form and the capsule is in the form of tablets.

Testimonies abound about the things Taabea Herbal Mixture has done for patients down with some serious disease. The following are the uses of the mixture

Taabea Herbal mixture has no alcoholic content as it is 0%.

Due to its efficacy in treating disease, it is not recommended for certain people. They are: