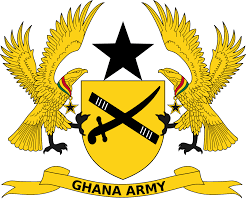 See the complete ranking structure of the Ghana Army (GA) in this post and their functions. From Highest to lowest rank and their various functions.

It was established two years after Gold Coast (now Ghana) obtained independence. The then Gold Coast Army Unit was withdrawn from the Royal West African Frontier Force and the Ghana Army got born out of that.

They are all under the control of the Ghana Ministry of Defence and Central Defence Headquarters. They are all based in the Greater Accra region of Ghana.

Because Ghana is part of the Commonwealth of Nations, she shares the same rank structure as that of the United Kingdom.

The Ghana Army ranks are the badges used by the Ghana Armed Forces, which is from the highest rank to the lowest rank. 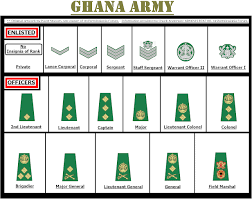 There are three brigade-sized commands that forms the whole Ghana Army. They are;

The Ghana Army is subdivided into two parts; the Officers and the Enlisted officers.

for the enlisted officers, Chief Warrant Officer is the highest rank while Recruit or Freshmen is the lowest rank.

In all, there are nine (9) ranks in the Ghana Army ranks for Enlisted officers. They are in descending order as follows:

General Roles of the Ghana Army

The Ghana Army exits to serve the Ghanaian people, to defend the Nation.

The Ghana Army is also supposed protect the national interests and to fulfil national military responsibilities.

The Ghana Army again provides the necessary forces and capabilities to the Military Commanders in support of the National Security and Defence Strategies.

The GA recruits, organize, trains and equip Soldiers who after becoming abreast of their units and joint team, conduct prompt, sustain combat and stability operations on land.

The Ghana Army is also given charge to provide logistics and support to make the other services function as they aught and also to give support to the civil authorities when their services are needed.

The Ghana Army provide forces and capabilities to prevail in war on terror, to be able to sustain our nation’s global commitments and to continue to build effective multinational alliance.

Last on our list is that, the Ghana Army go for peace missions, where they monitor cease fire, help to disarm warring factions or facilitate the exchange of war prisoners.

Roles of the Officers and the Enlisted officers in the Ghana Army.

As mentioned earlier, the Ghana Army is divided into two; that is the Officers and Enlisted officers. Find their respective roles below.

Role of the Officers

The Officers manage the affairs of the Army, and they also solve problems in the military.

The Officers also are the main influencers and military event planners, who leads and commands the Enlisted officers. They also are responsible for training the Enlisted Soldiers.

Role of the Enlisted Officers

Enlisted officers are military officers. They are under the Officers and take commands from them.